On July 16, 2019 members of the Rivers Edge Veterans Association (REVA) hosted an Ice Cream Social for veterans residing at Autumn Care Nursing Home in Shallotte. Thirteen members of REVA participated in the social to honor and thank seven veterans residing at Autumn Care for their military service. Of the seven veterans; three were army veterans, one was a marine who joined the priesthood after his discharge, one veteran served in the air force and two served in the navy. Of the two navy veterans, one female was a WAVE nurse who served during WWII. The others served during WWII, Korea and one was a Vietnam era veteran.  For their service the veterans were given memorial Poppy Pins and REVA pens. The social was well received by the veterans and the other residents of Autumn Care. All enjoyed the ice cream sundaes on this very warm summer afternoon. For the REVA members it was an honor for us to pay tribute to our fellow veterans. 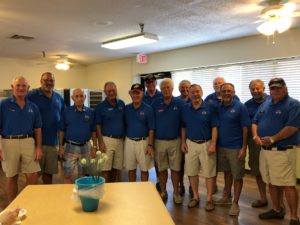 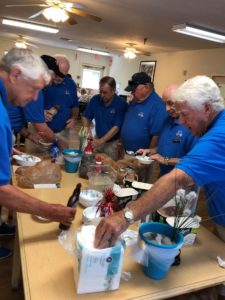